Posted at 09:44h in Uncategorized by Greg Moser

The Denton County Transportation Authority (DCTA) board of directors announced it has appointed Paul Cristina as the agency’s new president and CEO, according to the agency’s news release.

Cristina’s appointment follows a nearly six-month nationwide search led by Gregg Moser of Krauthamer & Associates LLC. The board shortlisted and interviewed five candidates, and three finalists were extensively interviewed in person following a tour of the entire system, according to DCTA. The board said it selected Cristina based on his demonstrated aptitude in leading the agency as Interim CEO since March 15, 2022.

“The DCTA Board appreciates Paul’s collaborative communication and leadership style, and he has gained the trust and confidence of the board over the last six months. We believe that his experience and vision will enable our agency to realize its tremendous potential to deliver value to the residents of Denton County and our region,” said Cesar Molina, chair of the DCTA board.

Prior to joining DCTA as the deputy CEO, Cristina served as director of public-private partnerships at BNSF Railway Company, where he led engagement with public agencies across the railroad’s 23,500-mile rail network on projects that improved safety, mobility, and efficiency for the railroad and the traveling public.

“As a resident of Denton County since 2010, it is a privilege for me to have the opportunity to lead the dedicated men and women of DCTA into the future,” Christina said. “The team possesses tremendous expertise and pride in what they do and I look forward to all we will accomplish to enhance the quality of life for our customers through high-quality transportation services.”

Before his tenure at BNSF, he served as a civil engineer officer in the United States Air Force, holding positions of increasing responsibility at Tyndall Air Force Base, Grand Forks Air Force Base, and overseas in support of Operation IRAQI FREEDOM. After leaving the Air Force, Cristina worked as a civil engineer and planning consultant in Florida and was named a “Top 40 under 40” aviation professional by Airport Business Magazine in 2012, according to DCTA. 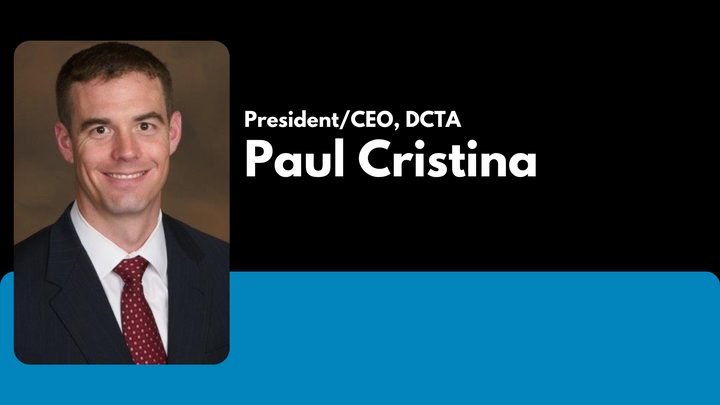